VANCOUVER, BC / ACCESSWIRE / February 6, 2019 / Ximen Mining Corp. (TSX.V: XIM) (OTCQB: XXMMF) (the "Company" or "Ximen") is pleased to announce it has received a multi-year work permit for the Company´s Treasure Mountain Silver Base Metal - Precious Metal Property, located in southern British Columbia. The permit allows for up to 11 drill pads and up to 10 trench / test pit sites in the east-northeast regions of the property. The permit covers areas of gold, silver and copper mineralization. The property partially surrounds the Treasure Mountain Property ofNicola Mining Inc. which hosts polymetallic veins and the historic Treasure Mountain silver-lead-zinc mine.

Company and reported historic highlights for the Treasure Mountain Silver Property include: 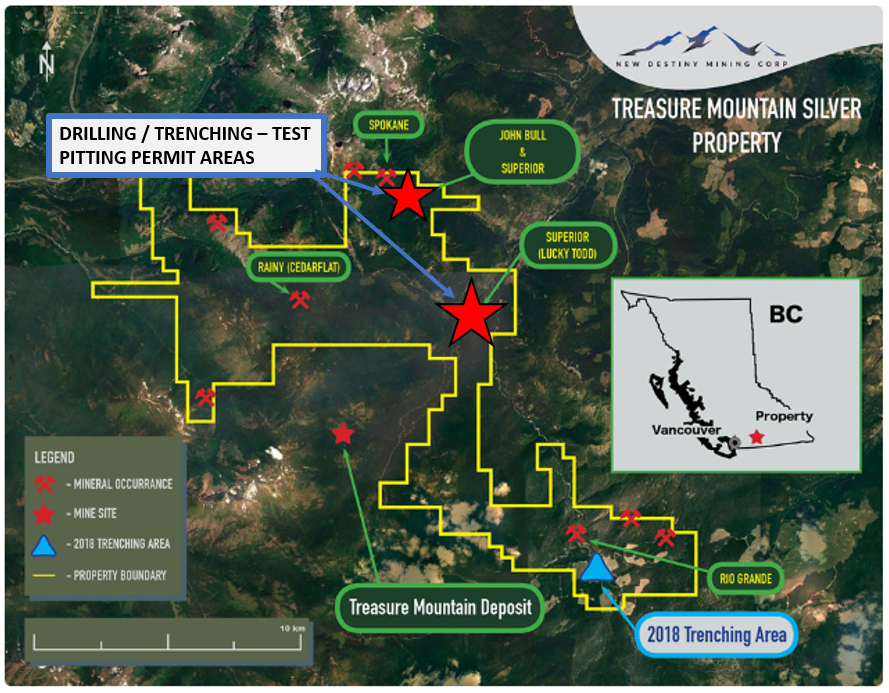 Occurrences with silver, gold, lead, zinc, copper and / or molybdenum are reported in various regions of the Treasure Mountain Silver Property. The multi-year work permit covers two target areas within the Treasure Mountain Silver Property. One target area is within the northeast region of the property in an area of reported gold bearing quartz veins. A quartz grab sample collected by the Company during 2018 in this area returned 11.3 g/t gold. The second target area is within the east region of the property in the area of the Superior (Lucky Todd) copper-gold occurrence. A porphyry dyke grab sample collected by the Company during 2018 at this occurrence returned 8.81 g/t gold. Another 2018 sample in this target area returned 0.894 % copper and 45 g/t silver. The permit is for both mechanical trenching / test pitting (up to 10 sites) and for diamond drilling (up to 11 sites).

The Company is pleased to announce that it has closed the first and final tranches of the non-brokered private placement previously announced on December 27, 2018, for gross proceeds of $250,000. Each Unit consists of one common share and one transferable common share purchase warrant. Each whole warrant will entitle the holder to purchase, for a period of 24 months from the date of issue, one additional common share of the Issuer at an exercise price of $0.30 per share. The financing closed in two tranches and the hold expiry date for the first tranche consisting of 877,000 units is May 5, 2019 and the second tranche hold expiry date totaling 123,000 units is June 2, 2019. The Company paid a cash commission of $800.00 and 3,200 broker warrants to PI Financial Corp. The broker warrants have the same terms as the private placement warrants.

The proceeds of the private placement will be used for general working capital and exploration work on the Company´s properties.

The Company also announces that it has granted 500,000 options at an exercise price of $1.00. The options are exercisable for five years and will be cancelled 30 days after cessation of acting as director, officer, employee or consultant of the Company. The options are subject to regulatory approval.

Allan Beaton P.Eng., a Qualified Person as defined by NI 43-101, is responsible for the technical information contained in this News Release.

Ximen Mining Corp. owns 100 percent interest in all three of its precious metal projects located in southern BC. Ximen´s two Gold projects are The Gold Drop Project and The Brett Epithermal Gold Project. Ximen also owns the Treasure Mountain Silver Project adjacent to the past-producing Huldra Silver Mine. Currently both the Gold Drop Project and the Treasure Mountain Silver Project are under option agreements. The option partners are making annual staged cash and stocks payments as well as funding the development of these projects.