Brazil and the Potash Shock

Over the next decade, Brazil is expected to become an agricultural super power making it one of the largest users of potash fertilizers on the planet. While potash consumption seems to have peaked in India and China as currently declining, the opposite is true in Brazil with a potash consumption showing steady long-term growth potential. It is forecasted that Brazil becomes the biggest importer of potash globally by the year 2020.

Over the last 15 years, the total value of Brazils crop rose from $23 billion to $126 billion and it is estimated to increase a further 40% between 2010 and 2019. Additional data by SOBER suggests substantial increases of agricultural production for commodities that consume most of the potash. Brazil owns 30% of the worlds arable farmland and it is projected that the country will have the worlds fastest growing agribusiness economy over the next 50-100 years.

Brazil has 500 million hectares of potentially arable land of which 100 million are currently under cultivation. This compares with the United States 350 million, Russias 300 million, and Chinas 200 million if they used every hectare available.

Brazil imports more than 90% of its potash requirements with imports mainly from Saskatchewan and the Ural region incurring total delivered transport and import costs into Brazil of around $90 per ton. The Brazilian government is not sitting around waiting for this, as it has made it a goal to financially back domestic projects in order for the country to become fertilizer independent. The Brazilian government has decided to use all powers to become potash-independent in the next decades. This will put the exploration and development of Brazilian potash desposit on the fast-track.

The global potash market is plummeting after a shocking announcement from the worlds largest potash producer, Russias Uralkali, on July 30.

Unexpectedly, Uralkali said that it exits the export cartel BPC (Balarus Potash Co.) to start selling potash on its own via Swissbased Uralkali Trading company besides planning to increase production by 30-40% to 14 million tons in 2014 from 10.5 million tons this year. This will increase the companys market share that stands at around 20% today.

According to Uralkali, this move is to compensate the revenue reduction from the falling potash price. Analysts expect that Uralkali will sell potash at a discount from now on in order to grow by increasing sales volume. This has lead to potash stocks across the board losing sharply.

 It is as if Saudi Arabia decided to leave OPEC  oil prices would fall immediately.
(Dmitry Ryzhkov, equity sales trader at Renaissance Capital)

BPC was jointly operated with JSC Belaruskali from Belarus since 2005 dominating the global potash market as supplying some 40% of worlds potash. BPC was one of the worlds two big potash cartels. The other is North-American rival Canpotex which is comprised of Potash Corp. of Saskatchewan (NYSE: POT), Mosaic (NYSE: MOS) and Agrium (NYSE: AGU). Canpotexs supply share of 30% will leave the American consortium as the worlds top exporter.

The former duopoly BPC, more or less in tandem with Canpotex, usually fixed similar sales prices when negotiating with India and China - the two largest buyers of potash. They influenced potash pricing by simply reducing sales as controlling the market with a 70% share of global supply. The potash price peaked above $1,000/ton in 2008.

 Uralkalis decision was made independently, without consultation with BCPs founder  Belaruskali, Belaruskali said in a statement. Uralkali emphazised that the split with BPC was  unavoidable and denies that it was a political move. In an interview to Russian business news publisher Vedomosti on August 5, Uralkalis CEO, Vladislav Baumgertner, said:

 Having analysed the situation, we decided to act... Throughout the preceding months we were informing the Board on what was happening: on the behaviour of our competitors, difficult market environment, and the fact that we were not supported by the markets when trying to increase the price. Therefore, when we have urgently called the Board meeting, the Directors unanimously approved the new strategy, based on the premise that if it was impossible to maximise prices in the existing situation we should maximise volumes. This is very rational for a company like Uralkali, which is an industry leader on production costs, and has an ability to expand production quickly and obvious geographical advantages. Our official statement then followed... So we asked ourselves a question: if we have such strong advantages, why should we suffer financially and face uncertainty? Especially given that the situation on the soft commodities markets and farmer economics were great, and yet even in such a favourable environment we could not achieve high prices, while also being restricted in volumes. So the logical step followed.

Uralkali initiated a paradigm change in the potash industry. The  price over volume principle is abandoned in favor of  volume over pricemeaning that sales growth is becoming more dominant than profit growth. High-cost producers like K+S from Germany are likely to struggle, whereas low-cost producers like Uralkali are set to increase shareholder value by sales growth.

 My honest answer to the question on how the price is going to change is I dont know. But the trend is obvious. If the volumes are up, the prices might reach the production costs of marginal players, about USD 250 per tonne. So, we might soon see figures like this... If the rules have changed, we have to eliminate greenfield developments; the producers which do not have a low cost base would deteriorate and shrink. Simultaneously, the demand should be stimulated by the low prices and active promotion of balanced fertilisation. After that, probably, consolidation.

Besides some producers going out of business, it is logical that many exploration and development projects worldwide will be abandoned or put on hold if the potash price drops below $300/ton for long. The market may then consolidate strongly with many friendly and hostile take-overs. Baumgertner mentioned that Uralkali will be open for merger discussions even with rivals like Potash Corp. or Belaruskali. Baumgertners answer to the question if consolidation of trading can mean a return to price over volume principle in future was:  Certainly, it can. But we are still far away from it. Until then, investors should focus on low-cost producers after the current sell-offs and when the potash price has stabilized at around $300/ton. However, some exploration and development companies may very soon start rising again as the market-wide sell-offs have created artificially low valuations of some few companies for a short time only. There exist only a few potash deposits that have the key ingredients of being developed into a mine no matter if the price drops below $300/ton. To find these companies now, while the market is in a shock state, may turn out to become one of the most lucrative bets in the history of the potash industry. Such companies, active in  independent potash regions of the world, are set to thrive in the upcoming weeks and months, because the current market changes are set to be beneficial to them.

Billions of Dollar have started to flow from high- to low-cost potash deposits while the general market is likely to get much smaller in terms of number of exploration, development and production companies. During such times of price corrections, market consolidations and fundamental shifts in supply and demand, investors can participate in creating wealth in an extraordinary way if the right companies are found at the right time.

Potash  the commodity of the next decade
(Goldman Sachs, April 2013)

We agree with a most recent statement by Germany-based potash producer K+S AG that the pricing for potash being spread by the media are unjustified and that they do not reflect the current supply and demand situation in the potash market. We also agree with K+S that the positive medium and long-term trends for potash should remain unchanged. Additionally, a price drop to $300/ton would increase potash demand substantially. The potash market is highly concentrated and thus represents a strategic asset to the few countries that host large potash deposits:

- 89% of global reserves are located in Canada and Urals, whereas 63% of sales are controlled by both cartels Canpotex and BPC.

- Global potash sales of around 60 million tons annually represent a large market worth $18 billion at $300/ton.

- Long-term growth rates of more than 3% annually are forecasted.

Currently, analysts across the globe are downgrading potash companies by up to 50% while warning that a potash price drop to $300/ton will substantially lower profit margins for producers and may put on hold some exploration, development and production projects. Brazil is the most important region in the world that can withdraw from that trend and become the winner of the current market turmoil.

The Brazilian National Fertilizer Association (ANDA) has released data showing that 2012 potash consumption increased (9% year over year) to a record 8.1 million tons of potassium chloride (KCl), 93 per cent of which was imported. This represents a 19% increase from the 6.8 million tons consumed in 2007.

Brazil currently has only one operating potash mine, the TV (TaquariVassouras) Mine in the Sergipe Basin on the east coast producing some 0.7 million tons KCl per year (7% of Brazils demand). The mine is expected to be exhausted by 2016 leaving the Amazonas Basin open to becoming the prime, and probably sole, potash producing region for Brazil. Verde Potash PLCs Cerrado Verde project in Minas Gerais was supposed to become Brazils largest potash mine, however, due to high production costs of estimated $310/ton (excl. transportation), the development is likely to be put on hold or abandoned permanently as the sharp decline in share price has indicated (-85% in 2013).

- Brazil is the worlds fastest growing potash market. 80% of all potash supplied to South America is consumed by Brazil alone.

- Brazil is 3rd largest potash consumer globally, albeit dependent on imports by over 90% of annual demand.

- The country exports 27% of all global meat, and is expected to export more than U.S, Canada, Australia, and Argentina by 2016. Agricultural exports exceed $175 billion USD per annum.

- Brazil is the world leader in ethanol production from sugar.

- Brazil is attempting to reduce imported potash dependency from 91% to 60% over the next 5 years. The government is actively trying to decrease fertilizer imports and provides strong financial incentives to develop domestic supply, besides streamlining processes exploration and development of target areas.

- Domestic supply can offer a transportation cost advantage of up to $225/ton. 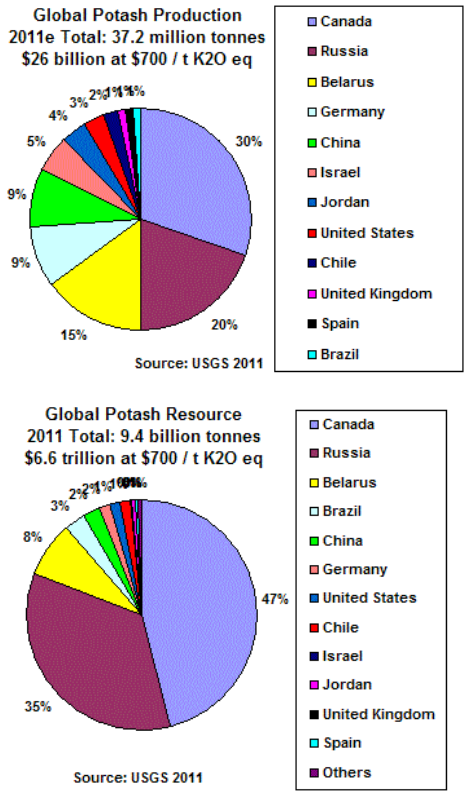 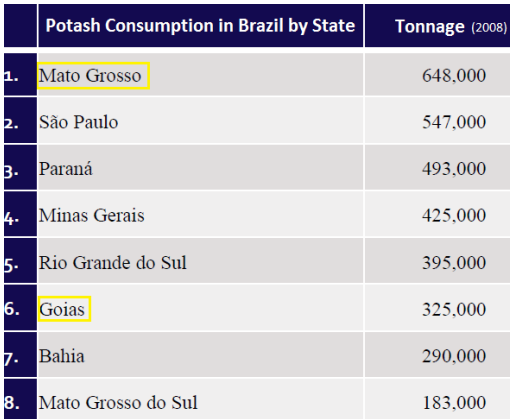 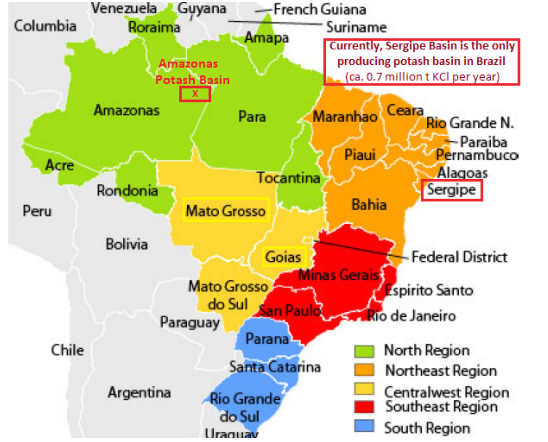